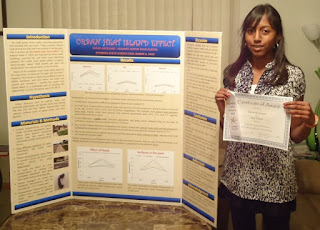 Temperature data collected by her at 5 different locations on 3 different days, revealed that concrete pavements and asphalt roads absorbed relatively more heat in the morning (between 8 am and 1 pm) and released relatively less heat in the afternoon and evening (between 1 pm and 8 pm) in comparison to natural surfaces (grass lawns and bare ground). As a result asphalt roads and concrete pavements continued to be warmer (25°C or 77°F) at 8 pm in comparison to bare ground and lawns (17°C or 63°F). This excess heat stored by artificial surfaces is released during the night time due to the fact that the temperature differences between all surfaces were less at 8 am next day. Similar data collected in fall and winter seasons did not show such drastic variations in the temperatures of different features. 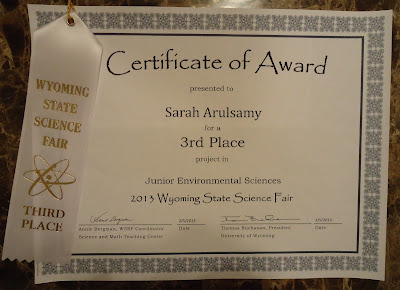 Sarah presented her research findings in the 2013 Wyoming State Science Fair in Laramie on 3/5/2013 and won the third place in the Junior Environmental Sciences category. 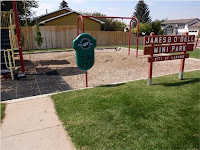 During the course of this work she noted that the average summer temperature at 1pm of tire mulch, an artificial surface in a children’s park, was 58°C (136°F). Based on this finding she recommended that the city has to post warning signs to alert parents about potential dangers to unsuspecting children. Her research was supported by WyomingView. She plans to continue this research in the summer of 2013 by including additional sites and more frequent measurements.
Posted by WyomingView