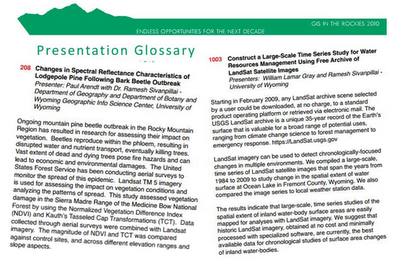 Using Landsat images Paul Arendt (BA Geography) analyzed the spectral reflectance patterns of areas impacted by the Mountain pine beetle in the Medicine Bow National Forest, Wyoming.  He combined Landsat observations with aerial survey data collected by the US Forest Service to identify differences in the reflectance patterns of beetle infected (n=77) and non-infected (n=50) areas. He calculated Normalized Difference Vegetation Index (NDVI) and Tasseled Cap Wetness Index for these sites and found that both indices had lower values at affected sites and these differences were statistically significant (p < 0.01). Within the 77 beetle infected sites, the mean NDVI and Tasseled Cap wetness values were higher (p < 0.01) in the patchy lower forest (< 2567 m) in comparison to the subalpine lodgepole pine (>2568 m) forest.  Describing the value of this research, Paul commented "...this project served as an excellent introduction to the process of scientific research".

Both studies were possible due to the availability of no-cost Landsat data.  Prior to the no-cost Landsat data era, purchasing 54 images that Bill Gray used in his study, would have cost him US$ 35,000 which would be beyond the reach of any graduate student.  "A unique aspect of this study is that it offers the end-user a technique to use the free archive of LandSat images in a time series for analysis..." said Bill Gray.

Every semester WyomingView offers internships to UW undergraduate and graduate students to work on projects that use remotely sensed data for addressing natural resource management issues in Wyoming.