In 1867, when it was granted a permanent city charter by the Dakota Territory legislature the City of Cheyenne was home to approximately 600 people. In 2010 its population was nearly 60,000 a 100-fold increase.

Data collected by Thematic Mapper sensor (on the Landsat 5 satellite) in 1985 (1980 Pop: 47,283) and 2011 (2010 Pop: 59,466) shows Cheyenne’s growth over 26 years. Highways I-80 and I-25 cross each other in southwest Cheyenne. Most of the growth has occurred in the northern and northeastern parts of the city. Green tones correspond to vegetation such as trees, shrubs, grasses, and croplands.

Ongoing construction activities are visible in the eastern side (County Fairgrounds) and southwest side (industrial complex) of the 2011 image. Change detection using imagery can help us understand the past and better plan for the future.

The Landsat 5 satellite was launched by NASA and operated by USGS for monitoring earth’s surface.

With the help of satellite images fifth and sixth grade students at Mr. Tim Blum’s geography class (photo above) at the UW Lab School (31 January 2011) got a birds-eye view of how humans have impacted or modified their environments.  Images acquired by satellites decades apart showed cleared forests, irrigated crop fields in the middle of the deserts, altered landscapes (new roads and water bodies), and urban growth.

As part of the Earth Observation Day (EOD) activities, WyomingView coordinator Ramesh Sivanpillai described the utility of images acquired by satellites are useful for monitoring changes on earth’s surface.

For example, Landsat images acquired in 2000 (bottom left) and 2009 (bottom right) shows the newly constructed roads, drilling pads, and ponds for an area within the Powder River Basin. 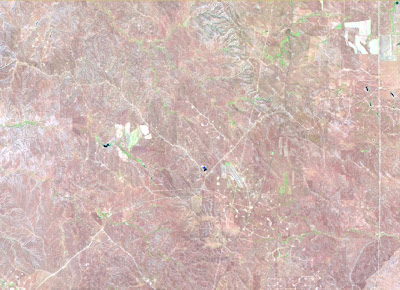 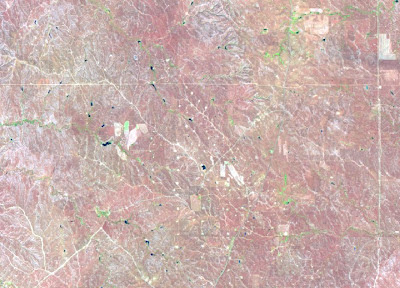 The goal of EOD activities is to introduce teachers and students to remote sensing science and technology and is promoted by AmericaView.  Sivanpillai works with individual teachers in Laramie-area schools and develops remote sensing course materials that relate to the topics taught to students.

Blum and his student teachers introduced students to the human impact on the environment.  The remote sensing “presentation fit with our curriculum and the students were captivated,” Blum commented.  “Your presentation certainly made an impression on our students because the information you provided was referenced in several discussions that occurred later in our unit.”  Tailoring materials to individual class needs increases student engagement and learning.
Posted by WyomingView No comments: