Fifty-one students at Laramie Junior High School (LJHS) saw how satellite images collected since the 1970s can be used to monitor changes in cities and water bodies such as rivers and lakes. In Jared Long’s social science class, students are learning about urban growth and changes in water bodies caused by natural processes and human actions. In particular, they were comparing these changes in developed, developing and under-developed countries.

WyomingView coordinator Ramesh Sivanpillai described how satellites and aircraft are used to acquire these birds-eye images.  Using images acquired by Landsat and TERRA satellites, he demonstrated the growth of cities in the U.S., Mexico, Uganda and middle-East. These images were acquired 10-30 years apart. Students saw how cropland and forests were converted to urban areas to accommodate urban growth. Students also saw the video created by NASA that showed the yearly expansion of Las Vegas from 1974 – 2011. This video highlighted the mushrooming of Las Vegas and the addition of subdivisions, golf-courses and commercial areas. Satellite images also showed the new dams and reservoirs, changes in their water storage over time, and impacts of catastrophic events, such as flooding, can have on cities. 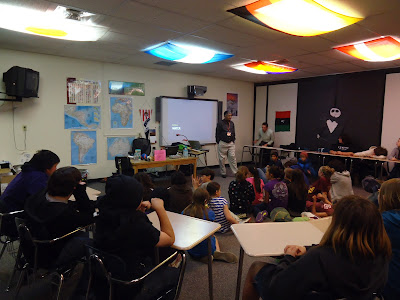 “Our students greatly benefited from this presentation” said Jared Long, social science teacher LJHS. “The presentation had been tailored to topics that have been addressed in our class over the course of the year, specifically how water bodies and urban areas change over time … our students' knowledge and engagement with these topics increased substantially.”

This outreach activity was conducted as part of AmericaView’s Earth Observation Day activities aimed at introducing teachers and students to remote sensing science and applications.